Here are some of our recent story submissions 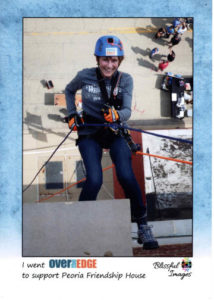 This experience for me was not only amazing because it is something I have always wanted to do but it was for a cause that I am so passionate about which is reading! This made it more than awesome!

My father didn’t learn how to read until he was much older in age and could not help us with our home work or read us a book when we were growing up.

So as I was going down the wall of the hotel downtown in May I could only think about the kids that will be able to read and help their children one day!

I also did this in honor of a team mate who has survived breast cancer. I was the Breast Cancer Super Hero! Here name is Rosie and she fought hard and beat cancer!

Many thought I was crazy for doing this BUT I would do it again in a heart beat and my smile all the way down should say it all.

Thank you for the experience of a life time!

Reality of challenges that occur in our daughter’s daily life are not lost on our family. You see our daughter has Down Syndrome and is severely Autistic. Most of the time she is non-verbal. Olivia is her name and parents at 22 we didn’t expect to gain such wisdom, passion and compassion from a little girl. Her strives to take on the edge daily is our inspiration to take on anything that comes our way. We have fought together for her education, laughed at the small things and edged towards greater equality.

That fight is the reason we joined this event 4 years ago now – the cause is great, but the metaphor couldn’t be more perfect for our lives. My fear of heights was the inspiration to step in her shoes and literally go over the edge. We know how special Olympics impacts our children, but we know too the comradery that comes with facing your fears in ways that impact you as a person and a community that needs the help. When I step on the edge, I always say this fear is just a single moment, but her fear may be lasting. I can do this one moment that may have an impact on someone for life.

Thank you for doing this event.

Standing on top of a nine-story building peering reluctantly over its edge was not how I usually spend my Saturday afternoons, but there I was.

As the communications guy for The Disability Network (TDN), it’s my responsibility to help tell our story, and Over the Edge Flint had quickly become a significant part of this year’s TDN story.

While our Over the Edge event allowed community members to willingly rappel down the side of the Durant building in downtown Flint, some of us were more excited by the prospect than others. Brendan Biazza and Riley Letterman were among the thrill seekers who comprised the ‘excited’ group. I’ll let you draw your own conclusions as to which group I fell into.

Brendan and Riley submitted winning entries in our Over the Edge youth sponsorship and their experience was sponsored by Blue Cross Blue Shield of Michigan. By the time Brendan and Riley arrived on the roof, I had already been up there for half the day and was a little less dizzy and able to speak more than when the day began. 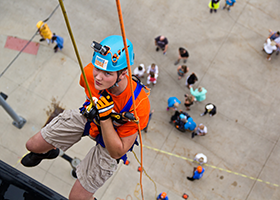 Brendan, a sophomore at Davison High School, was beaming as he stepped through the safety gate and on to our small platform braced on the edge of the roof. In his essay, he let us know that he had “never rappelled before and [he was] kind of scared about it.” If he was scared, I couldn’t tell.

Once rigged in, the next part is usually the toughest: putting your feet on the edge of the building and leaning back. Brendan took a deep breath, planted his feet and straightened his legs. I asked him if he was okay or something to that effect and he replied, “oh yeah!”

“Arms out, big thumbs up,” Jeremy, the rappelling volunteer smiled to Brendan. This was the classic Over the Edge shot that you’ll often see from event photos. Letting go, facing any fears and trusting the system are all part of the experience, and that picture embodies that. Brendan gave me a thumbs up as I

snapped the photo. “Both hands,” Jeremy said, demonstrating the pose. Brendan slowly released his right hand from the rope and struck the pose, a smile spreading across his face. Any last fear of the moment gone. 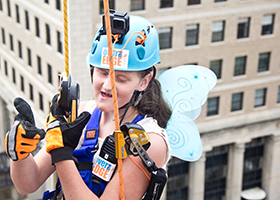 After a couple of other Edgers, Riley appeared on the roof, clad in her rappelling gear and sparkling fairy wings. The opening of Riley’s essay immediately caught our attention: “My name is Riley Letterman and I’m 11 years old and I’m totally blind. I would go over the edge to feel free like a bird. I may even sing a little on the way down.” I was really looking forward to her singing and admittedly jealous of her wings.

As she stepped onto the platform, she announced, “guys, I’m starting to rethink this whole flying like a bird thing.” While her voice was a little shaky, I couldn’t help but note the slight sarcasm in her tone and stifled a chuckle.

Even though she was letting us know that she was nervous throughout the hooking in, she never gave a full stop. Once she was dangling out over the edge, she gave me the thumbs up before beginning her rappel. I watched through my camera lens as she slowly made her way down to the cheering crowd below. I continued to watch after I stopped taking photos and realized I was leaning farther over the edge than at any point that day. Had I not, I would’ve missed the quote of the day: “by the way guys, this is nuts!” (said about two-thirds of the way down with a smile on her face).

We all overcame barriers that day, both on our own and together. You can call it interdependence, leaving your comfort zone or supporting your community, but that day, we called it going over the edge.

You can submit YOUR story, photos or videos by clicking here!

Here are some of the typical concerns we hear from Boards, and some information to help guide them:

How does my non-profit or charity get paid?

Participants register online to fundraise for your organization. They then reach out to their friends, family, etc to obtain peer-to-peer sponsorship of at least $1000. The dollars raised by these individuals from Over The Edge’s Signature events go directly to your organization.

What is included in an OTE Signature Event?

What happens if weather prevents my event from taking place?
Should we deem the weather to be a safety concern or a significant event hindrance for the balance of the day, we will work with you to re-schedule your big day.
Does Over The Edge have liability insurance?
Yes. Over The Edge carries a comprehensive $10 million insurance policy that covers all aspects of the event should any injury or building damage occur. This policy indemnifies all key stakeholders including your non-profit or charity and the building where the event is being held.
Will we have a lot of fun?
Yes! You and your participants are going to have a blast! We have a satisfaction rating of over 95% by our customers, and a repeat rate of 80%.
Earn your 100% ROI Guarantee (to start!)

Fulfill all of these requirements, and Over The Edge will guarantee that your event breaks even (100% return on investment).*

Now let’s kick it up a notch: here’s how to increase your guarantee to 200%!

Guarantee up to 200% ROI Guarantee by following these recommendations as well:

Fulfill all of these requirements, and Over The Edge will guarantee that your event brings in two times your event fees (200% return on investment)!*

Interested in some of these additional recommendations, but not all? You can pick and choose as you like; each one you adhere to will earn you an additional 20% towards your ROI Guarantee. Please note: You will need to meet all five of the basic requirements for the 100% ROI Guarantee for these additional offers to be credited to your contract.